Book Review: The Grapes of Wrath 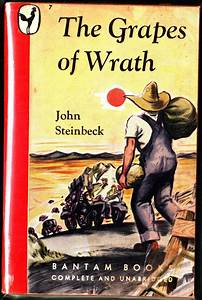 I recently read John Steinbeck’s classic, The Grapes of Wrath. The novel takes place during the Midwestern Dust Bowl, in which years of drought caused the land to cake and emit vast amounts of dust, enveloping Middle America. For years, crops fail due to annual droughts, forcing farmers to plant nutrient-guzzling cotton. Crop failures also cause banks to evict families unable to pay off mortgages and rent, while replacing tenants with large industrial tractors, plows, and augers. These machines and technology represent the new era of automation along with the exile of the common man and the displacement of religion.

The novel follows the impoverished Joad family on their journey from a grey, desolate Oklahoma to the promiseland of California, which is rumored to contain grapes, peaches, and apples all year round. Although moving to California presents the Joads a great opportunity to escape the perpetual cycle of poverty, it also presents a new danger: the unknown.

Steinbeck’s novel is full of vivid and evocative imagery. I enjoyed his chapter interludes, which shed light on the injustices endured by the middle class. My favorite anecdote being the description of a turtle crossing a highway and getting hit by a sadistic truck driver. After being struck, the turtle flips over and continues its perilous journey. The turtle represents the common man and the truck driver large corporations. This anecdote provides the message that no matter how terrible a situation, the common worker still moves forward. It is a powerful message, especially today in a time of so much wealth inequality, stagnation, and political division.

During my time reading, I felt as if this old America was another world. The lack of phones, electricity, flush toilets, and refrigeration transported me to an unknown time. Steinbeck returns the reader to a time of simplicity and pride, which I find quite refreshing when compared to today’s America. The novel also reminds readers of the blessings in the modern era, such as plentiful food, a more open society, basic hygiene, and better living conditions. Although we have access to technology, it seems that we have become more divided than ever. Steinbeck’s novel serves as a testament that in times of struggle and depression, Americans are still united and will persevere. For those seeking an escape from our technology-connected yet divided world, especially anyone who enjoys history and memoirs, I would certainly recommend this novel.