Book Review and Questions on Notes From Underground

The Underground Man is a poor, unhappy, intellectual. 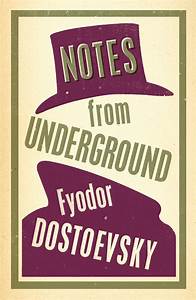 Published in 1864, Notes From Underground by Fyodor Dostoyevsky is considered to be the first existentialist novel. The 123 page story is split into two parts. The first is the Underground Man’s notes on freewill, knowledge, civility, rationality, and his critique of romanticism, while the second part is from The Underground Man’s life.

The Underground Man is a poor, unhappy, self-described intellectual who enjoys torturing lesser people from his government position. He is bad tempered and extremely vindictive, as he plans for months to bump into someone to establish equal footing. He also tricks a mindless young lady to fall in love with him so that he can toy with her for fun.

Here is the opening: “I am a sick man… I am an angry man. I am an unattractive man. I think there is something wrong with my liver. But I don’t understand the least thing about my illness, and I don’t know for certain what part of me is affected. I am not having any treatment for it and never had, although I have a great respect for medicine and doctors. I am besides extremely superstitious, if only in having such respect for medicine” (1). Dostoyevsky’s opening prepares readers for a gloomy, dark, and cynical piece. I found The Underground Man to be finatic and over-the-top, but also relatable. Although I would never classify myself to be as crazy or vengeful as he, The Underground Man embodies an inner wickedness that many can relate to.

I found The Underground Man’s interpretation of freewill extremely provocative. The Underground Man writes, “One would think; namely that a man, whoever he is, always and everywhere likes to act as he chooses, and not at all according to the dictates of reason and self-interest; it is indeed possible, and sometimes positively imperative (in my view), to act directly contrary to one’s own best interest… What a man needs is simply and solely independent volition, whatever that independence may cost and wherever it may lead. Well, but the devil only knows what volition” (33-34).

The Underground Man believes that an individual acts unjustly, unreasonably, and with spite to insure that they themselves have free will, like a child disobeying a parent’s commands or a student refusing to follow a teacher’s instructions; they both know it is better to follow authority but choose to disobey in order to assure themselves they are free. Yet later on, The Underground Man claims that individuals crave authority and rules. He writes, “We have all got out of the habit of living that we often feel something like loathing for ‘real life’ and so cannot bear to be reminded of it… We don’t know ourselves… Just try giving us, for example, as much independence as possible, untie the hands of any one of us, loosen our bonds, and we…. I assure you we should all immediately beg to go back under discipline” (122).

As a preceder to Nietzsche’s Übermensch, a person with independent values who is truly free, The Underground Man claims that people are too cowardly to live freely and take risks. Individuals trick themselves into thinking everything is alright, even though their time on earth is quickly slipping away. We do not venture for fulfillment, we settle for mediocrity. While individuals reject authority, rulers are necessary to distract the ruled from their own faults, weaknesses, and to provide easy pre-prescribed paths to follow. So, are the students of BC High living out their desires or are they living out someone or something else’s doctrines; ie. religion, parents, society?

The Underground Man also believes that if one were to live solely by reason and virtuosity, like Confucius, Buddha, or Jesus, then they themselves would lack free will. He argues that spiritual gurus and enlightened individuals do not live freely because their own doctrines and values dictate their lives. BC High faculty claim that their students are men of character and morals. So, are the students merely puppets controlled by The Grad at Grad and mission statement? And if so, do BC High students truly want to become men for others?

Notes From Underground is a short read but somewhat lengthy due to translation and writing style. The novella requires concentration and re-reading, so I would highly recommend annotating while reading in a quiet place. As one flips through the pages, the prose and style becomes more comfortable. Dostoyevsky includes bits of humor in the novel too, albeit sometimes dark. I would recommend this to readers looking to venture into the topics of Existentialism and philosophy, as Dostoyevsky covers human nature, morality, and freewill.

To end, here is the conclusion to the novella, “We even find it difficult to be human beings, men with real flesh and blood of our own; we are ashamed of it, we think it a disgrace, and are always striving to be some unprecedented kind of generalized human being. We are born dead, and moreover we have long ceased to be the sons of living fathers; and we become more and more contented without condition. We are acquiring the taste for it. Soon we shall invent a method of being born from an idea. But that’s enough; I shall write no more from the underground” (123). By The Underground Man asking us to live our own lives, does that mean if we try to do so that we are influenced by The Underground Man? This would mean that we are not truly free even when we try to be free. How can we escape living dead lives? Who around you is free? Or, are you surrounded by empty vessels and stale permutations?