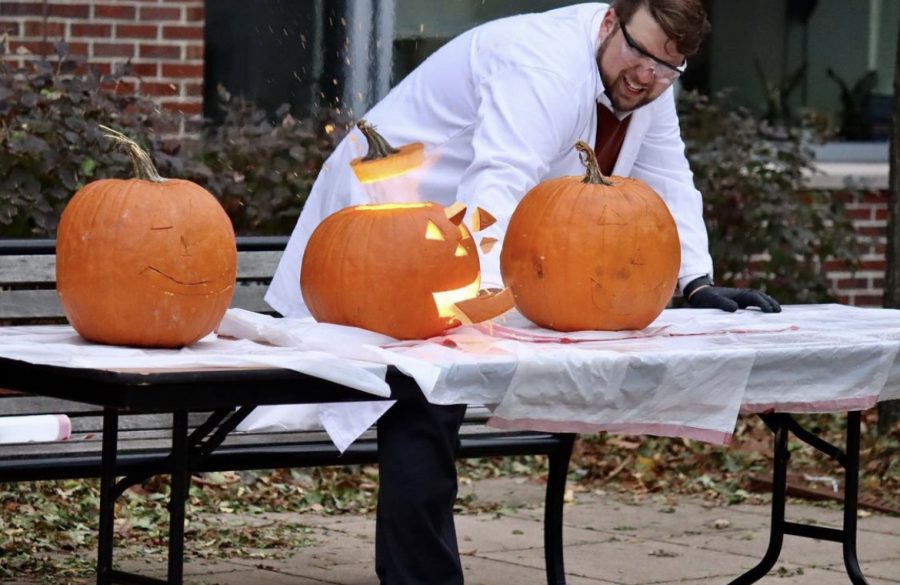 As any budding scientist will tell you, experiments are typically the pinnacle of excitement in the scientific field. Such is the premise of Lab Rats. Every Friday morning at 7:45, curious students assemble in the Chem Lab in Q3 to light their hands on fire, play with chemicals, and even explode the faces off of pumpkins—all under the responsible supervision of Dr. Sears, of course. When I received word that the jack-o’-lantern experiment was going down the Friday before Halloween, it became imperative that I attend.

A crowd began to gather around the three pumpkins outside BC High’s main entrance; this experiment was one that required an audience, and an audience it attracted. By my estimation nearly 70 students and faculty showed up to witness this spectacle. A few were the club’s regulars, however as people strolled past the peculiar setup, they were instantly drawn in and decided to join Lab Rats for a day. Dr. Sears explained to the growing herd of spectators that the explosion would be a result of the reaction of calcium carbide and water, when lit. He first demonstrated a warm up experiment by shooting a cloth straight up out of a plastic water bottle. The high concentration of gas from the reaction trapped in the small bottle was ignited, causing the cloth to shoot out. The first experiment was met with audible admiration, and us onlookers became as invested as a group of tourists seeing street performers hurdle strangers at Faneuil Hall.

Now came time for the main attraction: Dr. Sears would attempt to blow the nose, mouth, eyes, and top off the pumpkin using about 3 grams of calcium carbide and 50 mL of water. Students eagerly counted down the seconds until the explosion, “Five, four, three, two, one! Huh?” The pumpkin remained intact. This first attempt was unsuccessful, but Dr. Sears was able to determine that the root of the problem was likely the lack of oxygen in the pumpkin, preventing the calcium and carbide from, well… exploding. After a few tweaks and trials later, the countdown started again. “Five, four, three, two, one” pow! It was not as grand as it could have been if the reaction triggered on the first try, but in the end the Lab Rats delivered an exploding pumpkin, just as promised.

This experiment is just one of many performed by Lab Rats throughout the year, a club whose goal is to explore beyond usual chem topics and learn through hands-on demos. I briefly spoke with two true lab rats—Evan Dao ‘22 and Christopher Vidaurrazaga ‘23—about their favorite parts of the club. Evan loves the community aspect of Lab Rats, and how everyone is connected by their fascination for the power of chemistry. He claims the greatest part of the Lab Rats experience is that united feeling just before the reaction goes off. Christopher shared that the greatest part for him is simply the experiments, but the ones pertaining to fire are his favorites. He also gave props to Dr. Sears, the mastermind behind BC High’s best chemistry club.

If Lab Rats sounds like a place you want to be, then head on over to the chem lab in Q3 on Friday’s at 7:45. You can also follow their progress on Instagram @bchighchemistryclub and stay up to date with the latest and greatest Lab Rats experiments.