Martyrs (2008) gets a review that fully encapsulates its gore 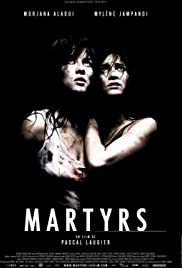 A film has never equally frustrated and disturbed me as much as Martyrs (2008). Although the film has its flaws, it still manages to be one of the most memorable and nauseating horror films I have ever seen. It must be commended for its refusal to censor any of its graphic content; however, it should not be mistaken to be needlessly gory. Unlike the vast majority of atrocious movies in the horror genre, all disturbing sequences in Martyrs hold a clear purpose. Even better, the film is able to deliver a message that will leave you shivering from head to toe once the credits roll.

On my first watch of this film, I admittedly considered it mediocre at best. I found myself becoming uninvested and bored as the film proceeded. While much of the movie’s aspects that I took issue with still fall flat on the second viewing, I was able to eventually fall in love with the fantastic concept it introduces. Torture is a central theme in the film, and the methods that are used to inflict physical and psychological pain are truly stomach-churning. What really makes me appreciate these horrifying sequences is that they are all present for a specific reason and it never becomes gratuitous.

Although the film does drag in the middle due to poor pacing, it remained unpredictable and surprising. You will not be able to be ahead of this movie. It refuses to follow any formulas or cliches that so many other horror films rely on. There are also some reveals in this film that are very well delivered. In the latter half of the movie, a substantial amount of time is spent in a jail-like confinement, as the audience is only subject to the limited information that the main character has learned. The audience constantly yearns for answers throughout the movie, and although there are some reveals at the end, much is still left up to interpretation.

The gore in this film is occasionally unconvincing. There are a few instances in which characters’ wounds don’t bleed. But that doesn’t hinder the horrific imagery it shows. Although this may not be best to watch with the whole family, it sure is a must-watch for fans of horror films despite its flaws.