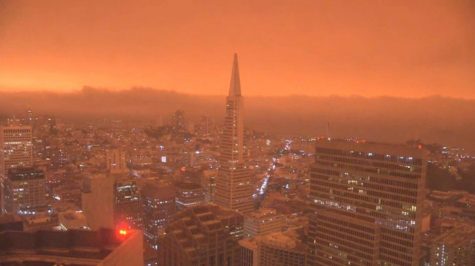 Imagine living in the state of California in the middle of 2020. In addition to COVID and quarantine, you must face the largest wildfire season recorded in Californian modern history: more than 8,836 fires burned 4,359,517 acres, which accounts for over 4% of the state’s total land.

The wildfires had cost the state of California approximately $2.059 billion (2020 USD), not to mention that almost 10 thousand buildings were destroyed. Moreover, every day you wake up like an astronaut on Mars in some sci-fi universe:

(Source: “‘Like a Scene from Mars’: Skies in Parts of California Turn Orange as Wildfires Rage.” NBC News, https://www.nbcnews.com/news/us-news/scene-mars-skies-parts-california-turn-orange-wildfires -continue-n1239659)

Of course, this is not something one can expect to see annually in California, so what made this year’s wildfires so special?

As simple as it sounds, one of the most important prerequisites for wildfires is dry weather. “As long as stuff is dry enough and there’s a spark, then that stuff will burn,” said Park Williams, a bioclimatologist at Columbia University’s Lamont-Doherty Earth Observatory.

One thing to keep in mind though, a “spark” does not necessarily have to be natural lighting. In reality, especially in California, most wildfires are known to be caused by downed power lines.

California usually gets most of its rains in fall and winter, leaving crops and plants most of the summer to dry up. However, this year’s climate change has undoubtedly augmented the conditions.

First, not only does climate change make fuels drier, it also makes the snow melt faster resulting in a longer heat season. This further lowers the moistures in the soil while increasing the temperature at the same time. In fact, five of the state’s hottest years on record occurred in the past decade. “This climate-change connection is straightforward: warmer temperatures dry out fuels. In areas with abundant and very dry fuels, all you need is a spark,” Park Williams commented.

Second, climate change also affects the snow patterns and rains of a majority of the American West: spring often comes earlier than expected, and the hot-season lasts longer. According to a study conducted by The Royal Society in 2016, over 70 percent of the area burned in forest fires between 1970 and 2012 happened in years where the winter snows disappeared early.

However weird it may appear, the choices people make regarding where they live actually worsen the situation. As more people choose to move into forested areas (also known as the urban-wildland interface) in California, the probability of an incident rises significantly. Yet, this is not the end. A study conducted in 2015 titled “​Identification of Two Distinct Fire Regimes in Southern California: Implications for Economic Impact and Future Change​” mentions the Santa Ana winds, which bring dry air from the Great Basin area of the West into Southern California. These winds create a second wildfire season every year around October through April. According to the study, this type of wildfire spreads approximately 3 times faster than normal wildfires in the summer times. Most importantly, it burns closer to urban areas. Combined with the many houses built around the urban-wildland interface, these fires were responsible for 80 percent of the economic losses over two decades beginning in 1990. Also in accordance with the research, the already dry wind may worsen by mid-century.

In an interview with the New York Times, Dr. Williams at Columbia University expressed his opinion on fire suppression: “For the last century we fought fire, and we did pretty well at it across all of the Western United States. And every time we fought a fire successfully, that means that a bunch of stuff that would have burned didn’t burn. And so over the last hundred years we’ve had an accumulation of plants in a lot of areas. And so in a lot of California now when fires start, those fires are burning through places that have a lot more plants to burn than they would have if we had been allowing fires to burn for the last hundred years.” Just like Donald John Trump once also said, “this is more of a management situation.” Through the use of prescribed burn (the burning of an area containing potential wildfire fuel before fire season), it is possible to reduce the spread of wildfires by a significant amount.

All in all, there are many reasons why this year’s wildfires are of a severer degree. However, we cannot just blame everything on climate change and do nothing else about the situation. Many studies show the conditions in the western U.S. may continue worsening for many years. Regardless of one’s point of view, various forms of action are required and recommended.

– Pierre-Louis, Kendra, and John Schwartz. “Why Does California Have So Many Wildfires?” The New York Times, 27 Oct. 2020. NYTimes.com, https://www.nytimes.com/article/why-does-california-have-wildfires.html​​.