WandaVision & The Future of Marvel 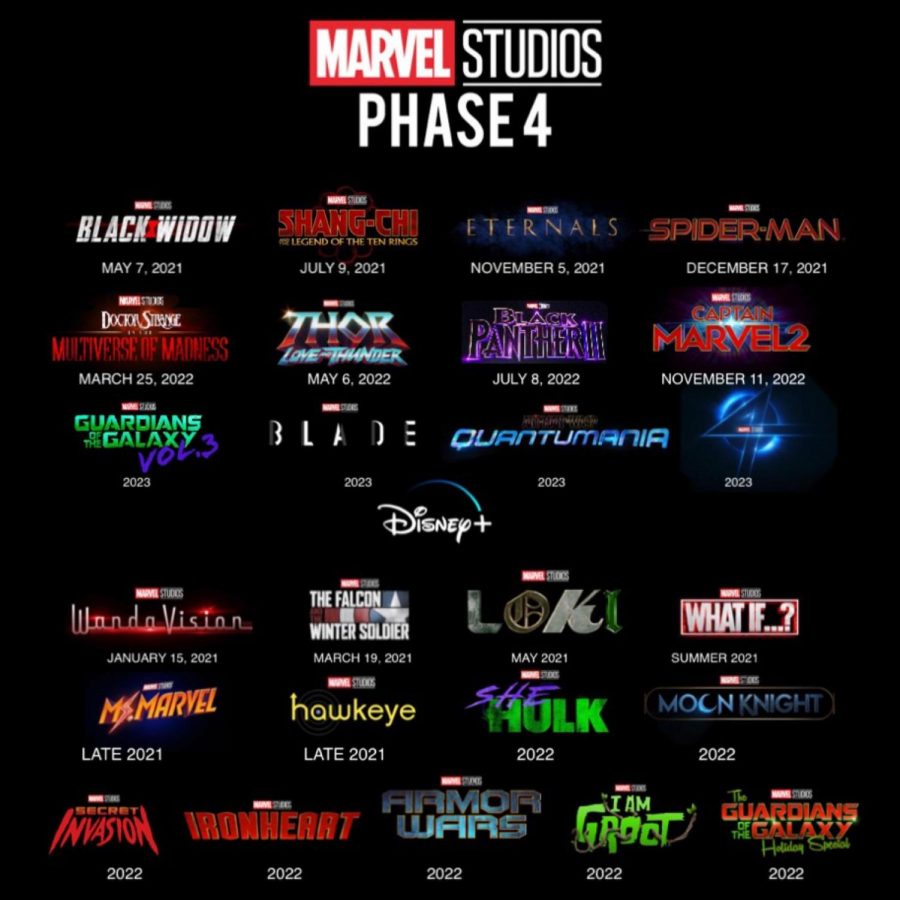 Witches, mutants, sentient weapons, soldiers… a multiverse? The Marvel Cinematic Universe, better known as simply the MCU, is back from a painfully long break with their new one-season series, WandaVision. This is the first Marvel content we’ve gotten since the release of Spider-Man: Far from Home in July 2019, and a lot happened in these nine episodes that could potentially be setting up the future of the entire MCU.

Even if you have not seen WandaVision yet, you’ve certainly heard of it. Ads for the show play after every YouTube video and dominate your social media feed, not to mention the memes and talk that it has generated. Basically it follows two Avengers — Wanda and the previously dead Vision — starting a new life in the suburban town of Westview, New Jersey. Strangely, each episode plays like a sitcom set in a different decade. Suspicious moments and side characters challenge viewers’ ideas of what is going on inside of Wanda’s new reality as she struggles to recover from past traumas. With every passing minute in the series, more and more reveals itself while stirring up even more questions.  The introduction of numerous superheroes/villains leaves infinite possibilities to a “Phase 4” MCU that will look completely different from anything seen before (spoiler warning from here on).

The show gives fans an upgraded version of the Wanda Maximoff as the Scarlet Witch, an extremely powerful being with currently untapped potential that she was born with, but augmented by the Mind Stone. She is last seen studying the Darkhold, a book of witchcraft that is the key to how witches and sorcerers will play a large role going forward. This is nearly confirmed, as Wanda and Dr. Strange are set to link up in 2022 for the movie Doctor Strange in the Multiverse of Madness. Another additional character now running loose in the Marvel world is White Vision, a “sentient weapon” created by SWORD director Tyler Hayward from the lifeless robot-body of original Vision. He seems to be benevolent for the moment, but who knows what could have been programmed into him. The last two big characters are Monica, with newly discovered light-based powers, and Agatha, an evil witch currently under Wanda’s mind-control. All of these new additions are unique and have loads of possible applications, so expect to revisit them in the future.

As a result of witches being a main focus of WandaVision, the MCU now has an entire unexplored realm of magic and potential threats to play with. One theory that gained a substantial amount of popularity was the idea of a multiverse. Many guessed that Wanda was able to pull off her reality-altering “hex” by grabbing people from different dimensions to fill her town. That would have explained how Vision was brought back to life, why the actor who played her “brother” also acted as a superhero in the X-Men movies, and where her twin children came from. It was pretty far-fetched however, as parallel universes would be a huge, integral change in the MCU that is likely too big for a TV show to reveal. Don’t rule out the possibility of a multiverse though, Marvel has referenced it several times throughout their films and Wanda’s latest magic-boost may hold the secrets to unlocking it. There is literally a film called Doctor Strange in the Multiverse of Madness in the works as I mentioned previously, so it is safe to say that this theory will see the light of day at some point. Speculation about mutants has also gained traction lately, not only because of that X-Men casting nod but also due to Wanda’s discovery that she was actually born with her powers instead of receiving them later in life. Technically this means she has a mutant gene, and it begs the question of how many others like her there are. Maybe these mutants will be dragged over from other Marvel universes as theorized for WandaVision, or perhaps they have always been present.

Next in the MCU lineup is The Falcon and the Winter Soldier airing on March 19th. This seems more like the Marvel content fans are accustomed to, with the trailers and a $150 million budget suggesting lots of fight scenes and action. Loki will follow that one on June 11th and likely focus on setting up future plots mostly outside of Earth. Whatever the future of Marvel looks like, it is sure to be ridiculously engaging and probably more complex than ever.