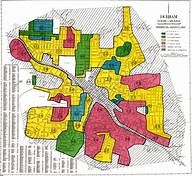 Racism has permeated American society to such an extent that it can be daunting to discover. Systemic racism is commonly talked about, but what that system looks like is misunderstood. While economic inequality transcends race,  people of color disproportionately feel its effects. This cycle consists of racist policies that have diminished the wealth of people of color and a failing education system that forces impoverished children to remain impoverished due to fewer opportunities for success.

At the end of the Second World War, the Servicemen’s Readjustment Act of 1944 was passed. This act was called the GI Bill and gave greater opportunities for soldiers after the war had ended. Through the Federal Housing Administration, the mortgage rates for soldiers had decreased drastically, while the down payment required to buy a home decreased from roughly fifty percent to merely twenty percent. The GI Bill had also granted greater educational opportunities for veterans so that they could rise to a higher status in society.

The only issue of the GI Bill was that the majority of the benefits that were granted to veterans were not available to black soldiers. These men had laid down their lives to fight for their nation. They were placed in segregated barracks and decided to fight, even though they were fighting for a nation that did give them the respect of equality. A major reason for wealth inequality is homeownership. When it was made easier for white people to own a home than for black people, it had created a racial wealth income gap that has persisted into today.

With wealth inequality stems from the GI Bill, racial segregation in the housing market had also been affected by the GI Bill and the Federal Housing Administration. Programs that the Federal Housing Administration, or FHA, pushed were exclusively for white homeowners. One such program was the building of Levi Town. Levi Town was this amazing and massive suburban community that had a high quality school system. The residents had prospered from the housing prices gradually increasing in the area over time and the quality of life there was ideal. The only issue with this town was that real estate agents could not sell to African American families. Also, homeowners were afraid that when black families would move into a primarily white town that the worth of their homes would rapidly decrease. The inherent effects of FHA policies, such as these, was a fear of black homeownership and white flight that led to housing segregation throughout America, which to a great extent continues into today.

An additional reason for the lacking economic success for people of color was redlining. Redlining was the act of denying a credit loan to a person from certain neighborhoods who were otherwise eligible for that loan. The neighborhoods in question were most often neighborhoods that were mostly African American or Hispanic American. The results of this practice led to a decrease in the ability for people of color to receive a loan from a bank to invest in a business opportunity or to buy a home. Redlining, as a practice, was ended in the Fair Housing Act, however, the effects of redlining persist to this day. There is almost a domino effect that occurs in situations that pertain to the economy. A federal bill or banking practice will have its effects felt for a long period. Another example of this domino-like effect is how the banking practice of buying on the margin had helped lead to the Great Depression which lasted for quite some time. As the effects of buying on the margin were felt long after the practice had ended, so too do the effects of redlining have a prominent impact even today.

Policies were sustained through the 1980s to today due to color blindness. Color blindness is when a person believes themselves to be in a post-racism society. A color-blind person would believe that racism does not exist because they cannot see racism anymore. A major factor in color blindness becoming prevalent in society is the decrease of overt racism, such as lynchings, and the increase of covert racism, such as the GI Bill. Color blindness has allowed systemic issues concerning racism to continue. The racist policies of redlining and the GI Bill may have been ended, but their effects were not repaired. Their effects had led to the overall decrease in black and Hispanic wealth. When specific races become poorer, their success will decrease due to the inherent effects of poverty.

When a child is born into a household that is within the poorest class of society, the likelihood of that child climbing to the top of society should be equivalent to any other child in any other class if America is truly economically free. This is not the case in America. It has been increasingly difficult for Americans from the lowest class in society to rise to the highest class in society, especially if that American is black or Hispanic. The reason for this lack of economic mobility is the education system in America and to a great extent that the education system is intertwined with job opportunities.

Typically, children have a very similar education to their parents. Therefore, it requires a lot of effort and fortune to rise out of an impoverished family with parents who do not make more than a high diploma. As seen from the policies that were previously discussed, such as redlining and the GI Bill, African Americans and Hispanic Americans have been forced into the lower class of society. Since they are in the lower class of society and America has less economic mobility, the ability of African American and Hispanic American students to rise out of poverty due to a poor education system.

The education system in America wildly relies upon property taxes. This system proves to be an inhibitor for economic mobility, as it rewards the rich with better opportunities and outcomes, but provides the poor with next to nothing. Imagine if the top teams in the NFL received the top picks in the draft every year. Crazy, right? In economically successful regions, paying taxes for a child’s education does not seem unfair because there is enough funding for schools. This is not the case in low-income areas in which the ability to fund schools is drastically decreased. Lower-income areas lead to underfunded schools that have fewer resources and lower graduation rates.

Due to a racialized housing market, these underfunded schools are most often composed of African American and Hispanic American students. The fact that black and Hispanic children are more likely to be unsuccessful, not because they chose to but because they are forced into impoverished settings from birth, is unacceptable. The teachers that work at underfunded schools have a greater chance of quitting their profession entirely. A survey stated that fifty-two percent of teachers who believe their school to be underfunded have heavily considered quitting their jobs. Oftentimes, low budgets force already underpaid teachers to spend their own money on education supplies for their students. Teachers struggle at underfunded schools, not to their fault or their communities’ fault but due to the system of inequality that has been presented here. The parents are born into a world in which they are less likely to succeed. For this to happen, a child of color needs to work much harder than the average American, just to avoid poverty. America needs to be better than that.

There is no singular reason as to why systemic racism has permeated American society, or a panacea to wipe it away. Housing segregation leads to a segregated schooling system, wealth inequality leads to a large wealth gap between races, an inherently flawed schooling system has posed a detrimental threat to the success of black and Hispanic children; education leads us to boundless discussions on intersectionality. As a consequence of centuries of colonialism and slavery, racial discrimination dwells in every corner of our society. We need to focus on the material conditions of black and brown Americans by lifting mass amounts of Americans out of poverty, rather than promoting more economic inequality in the form of billionaires and executives.

McClear, Sheila. “A Disturbing Percentage of Your Kid’s Teachers Are Thinking about Quitting Due to Bad Pay.” Ladders, Ladders, 13 Aug. 2019, www.theladders.com/career-advice/a-disturbing-percentage-of-your-kids-teachers-are-thinking-about-quitting-due-to-bad-pay-working-conditions.