Talking to a Vietnamese Refugee

On September 27, Nam Pham, a Vietnamese refugee and the former Assistant Secretary of Business Development & International Trade, MA, spoke to various Hyde Scholars and members of AAPIC to discuss his experiences. I wanted to learn more and write down some of his stories, so here is the interview. 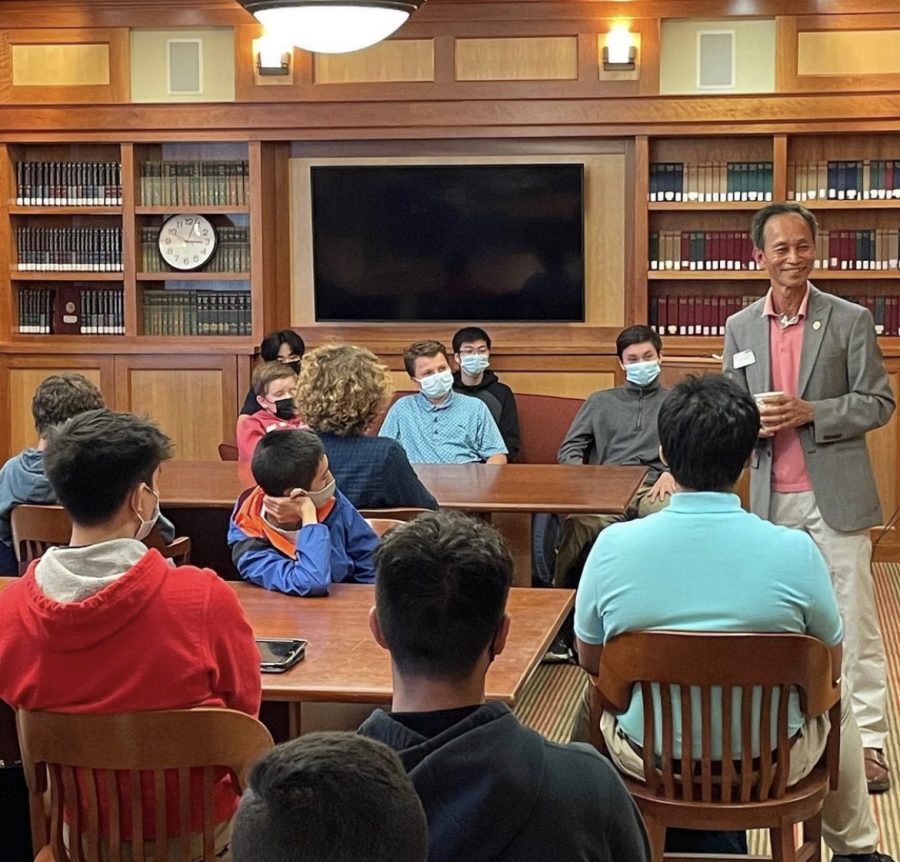 Nam Pham, a Vietnamese refugee, shares his struggles and journey to America

“Even though I have been in the U.S. for 46 years now, the pain and emptiness is still there.”

On September 27, Nam Pham, a Vietnamese refugee and the former Assistant Secretary of Business Development & International Trade, MA, spoke to various Hyde Scholars and members of AAPIC to discuss his experiences. I wanted to learn more and write down some of his stories, so here is the interview.

Why did you leave Vietnam during the Vietnam War?

“South Vietnam was fighting for its independence and freedom from the North. The North was controlled by a communist dictatorship. My parents had lived in North Vietnam for a couple of years under the North Vietnamese communist government, and they had witnessed a lot of terrible things. People were executed on site without any reason, the government would knock on your door in the middle of the night: they wanted to control everything. We had to leave because we did not want to live under such a terrifying regime. I still remember my parents telling me that had we stayed, me, my brothers, and my sister would not have been allowed to go to school; they would look at my family background and would put my parents in (what is very similar to) concentration camps.”

Was it painful to leave your home in Vietnam?

“I was only nineteen years old. I just finished high school and my first year in college. I had friends, girlfriends, relatives (uncles, aunties, cousins), you name it. You would be at a loss when you realize, ‘Oh, you wouldn’t see any of these people that I care for a lot, that I love a lot— you won’t see them again.’ […] It was painful but you could not cry out because it was too hard. Even though I have been in the U.S. for 46 years now, the pain and emptiness is still there. There’s a hole in your heart that would not go away: ‘What happened to her? What happened to him? Are they still alive?’ There’s a lot of questions still in your head.”

As you had to flee from country to country, what were some of the conditions you experienced in the refugee camps?

“I was fortunate in that I did not have to go through a lot of hardships as compared to other refugees who tried to leave Vietnam in the late 70’s to early 90’s. I stayed in the camps run by the U.S. armies, so we were fortunate that we had the ‘American standard.’ We were not mistreated, even though our mental state was not that stable. We had enough food, we had enough water, people treated us with dignity, and the American soldiers tried to help us. I’m happy to say [and other 1975 refugees] were very grateful for the assistance we received from the U.S. soldiers. But people who lived in the refugee camps in Thailand, in Hong Kong, in the Philippines, in Malaysia and Indonesia in the 80’s had a much harder time.”

After all of your struggles and strife, how did it feel when you first stepped foot in America?

“I had mixed feelings [Although I appreciated the treatment we received in the refugee camps,] I was quite angry at the American government because they had promised South Vietnam to fight against the invasion of North Vietnam. Most of us felt that we were abandoned by the U.S. government, so we weren’t very happy. We had no plan to come to America, we had no plan to abandon our family, our country, and start a new life. America suddenly became our heaven, and later became our home. But America also caused some problems for us […] South Vietnamese soldiers did not have enough [supplies] even though America promised to provide that.”

What difficulties did you face when you had to adjust to living in the United States?

“Language and culture were the two most difficult things for us. I could not speak much English when I first came to America. I did not really understand American culture. At the same time, my mind was still back in Vietnam, back in the refugee camps. But during those first few years, I had a single focus: to help my family and my younger siblings to make a new life. I still had to make something out of myself, and I had to prove to Americans that we South Vietnamese were not bad people[…] In the meantime, we still wondered what happened to our loved ones in Vietnam, so we also tried to save money to help our relatives. [Because of our limited English,] the only jobs that I could get basically paid minimum wage.”

From these struggles, do you consider yourself Vietnamese, Vietnamese American, or some other label; do you place “American” in your label?

“Definitely. I have lived in America much longer than I lived in Vietnam. I feel as much as an American as any other American. In a sense, I feel that I appreciate America more than any others because I have compared what I’ve been able to achieve in America with what I have seen in Vietnam in the past and now. On the other hand, I was born in Vietnam, and I’ll always consider myself Vietnamese. And I think a large portion of the population will still look at us as Vietnamese or Asian.

Most people have no clue that Vietnamese or Chinese or Japanese or any other Asian group are quite different. Having said that, I think being a Vietnamese American or being an Asian American gives me certain advantages as well as disadvantages. I could navigate or function in both cultures and both languages. I could be either of both. On the other hand, I could not really, fully be 100 percent in the U.S. or in Vietnam. At the end of the day, though, I feel fortunate and proud to be a Vietnamese American. […]

Being Asian Americans, we sometimes feel that we’re never really part of America because most people in America don’t look like us. […] I try to tell myself that that is what makes us [Asian Americans] unique. We can help Massachusetts more than any other group; we can connect Massachusetts to Asia. We can connect different ethnic groups together because we understand the pain and we know how to bring people together.”

With your success, you seemingly achieved the “American Dream”; why do you think you achieved this?

“I call it the three H’s: First, you have to be hopeful. Whether you were refugees or not, you have to tell yourself and believe that tomorrow will be a better day. Hope is very important, but hope alone is not enough. We have to work very hard. Asian Americans often have to work at least twice harder than the typical American to achieve what we have to achieve. The third H is help. Americans in general are very generous, good people, and I cannot be where I am without the help of other people. But also we have to help others when we are able to; the more we give, the more we get.”

As a refugee, do you feel any affinity with the current struggles of refugees in our modern world?

Most of the scientists who work in biotechnology are immigrants or refugees, whether they’re from Europe or Asia or Latin America. We can look at the top: highly educated, highly successful people. At least a part of them were immigrants or children of immigrants. If we look at the people who clean your school or clean my office, they’re all immigrants. The special contribution of immigrants and refugees to our society is very immense. […] Whether you are talking about so-called ‘legal’ or ‘illegal’ immigrants, each refugee and immigrant will and is making contributions to our society that make our lives much easier.”

Do you have any final words for The Eagle?