The Source of Senioritis 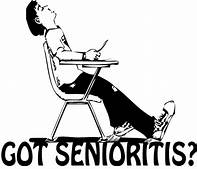 The senior class has had a rough year. Much like the rest of the world, we’ve spent the last year masking up and social distancing to stop the spread of COVID-19, in the hopes that we may get to have a proper conclusion to our time at BC High. However, there seems to be a new virus taking hold among the class of 2021, one that can’t quite be stopped by plexiglass in the library and QR codes on lunch tables. This virus is ruthless—it drains every ounce of our motivation and obliterates our sense of purpose. Symptoms include missing Canvas assignments, mysterious absences from classes, and a perpetual low-effort attitude towards all things academic. Of course, I’m referring to the notorious senioritis.

Honestly, it’s no surprise that senioritis cases are especially bad this year. We’ve had to endure a taxing college admissions season, a brutal week of midterms, and the overall academic stress of BC High. Add that all on top of the political and societal catastrophes of the past year, and I think it’s safe to say that us seniors are a tad bit exhausted. Perhaps this year’s increased rate of senioritis cases can be attributed to our own expectations of what senior year could have been. Instead of a celebration of our careers as men for others, we’ve been met with a less-than-ideal reality, one where half of our class is traveling the one-way halls of McElroy while the other half sits in their pajamas at home. We’ve lost our after-school forays into Boston, football games have been sacrificed, and we’ll most likely miss out on not one, but TWO proms. If I had a nickel for every time prom was cancelled due to a plague, I’d have two nickels, which isn’t a lot, but it’s weird that it happened twice, right?

To investigate the issue further, I sat down with a few current seniors and talked about senioritis and motivation in general, and it seems as though the source of many seniors’ lack of motivation is the competitive nature of BC High. Patrick Cullinane ‘21 puts forward the idea that “within this competitive nature, there lies an artificial motivation that is thrust upon every student. This atmosphere of competition may work well for some and inspire a strong work ethic, though others may struggle and move forwards in life not knowing how to motivate themselves. This requires some serious thinking on behalf of all members of the BC High community as to how well the school prepares young men for the world ahead.” Senioritis may not be a result of our own shortcomings—rather, it may just be a consequence of BC High’s unending competitive nature, which can be seen in the classroom, the sports field, and even on Zoom.

Seniors’ lack of motivation does not only stem from our discontent with the present; it can be attributed to our uncertainty of the future as well. The college process, as jolly and jubilant as it was, has left us seniors running on empty for the foreseeable future. While some of us know where we’re headed, most of us are still awaiting those long-coveted acceptance letters. Of course, these letters are coming from campuses that we’ve never even set foot on, with many of us having blindly applied to colleges without even knowing if these schools are the right fit for us. Despite the arduous challenges, we have truly given the college process our all—because we’ve been taught that there was no other option. Brandon Thomas ‘21 spoke to me about this idea, and how BC High’s emphasis on college may ultimately be one of the prime sources of senioritis:

“Since freshman year we’ve been taught that college is the end goal. Senior mentors mention it as they make their final decisions. Faculty talk about the importance of clubs and outside activities as it relates to college. Grades especially are mentioned in a way that constantly alludes to it. Guidance counselors and teachers often say things such as “Work hard on your midterms, colleges see them”, or “Junior year is important, colleges focus on it”. Thus school becomes more about the letter next to your report card and exams at the end of the year than its original purpose: to learn. So, if for three and half years the goal for school itself has been college, when that goal is met, it makes sense that so many students lose all motivation. Work and tests are still graded in the same way, but suddenly the letter that we get at the end of the year loses its significance. I’m not trying to blame faculty here, BC High is a college prep high school after all, but this method of churning out college acceptances is, in my opinion, detrimental to the long term passion for learning and curiosity in our students. The focus needs to be on learning, not on the end result. And obviously there will always be students who thrive and find passion in the current system, but placing those students on a pedestal and blaming others who are struggling for their own lack of motivation just results in the repetition of this senioritis cycle and the continued harm of students’ mental health.”

Brandon points out how college has been the most motivating factor throughout our years at BC High, and how that fact is ultimately detrimental to our sense of motivation. Rather than passion, many of our decisions have solely been driven by the need to catch the eye of an admissions officer—what clubs we join, which AP classes we enroll in, and even the groups of kids that we hang around with. College has been at the center of everything for us, leaving no room for genuine passion.

In the eloquent words of the inimitable Roy Zhu ‘21, “Senioritis is worse this year.” It is worse not only because of the pandemic, but because of the crumbling foundation that our senses of motivation are built upon. The current state of affairs for the senior class is not necessarily the administration’s fault. But it’s not the seniors’ faults either. This year’s sprint to the finish looks more like a slow Sunday stroll, but after the year we’ve just been through, can you really blame us for slowing down a little and trying to enjoy the time we have left on Morrissey Boulevard?