Active and Passive at BC High

Two very different methods of investing, but which is superior and why 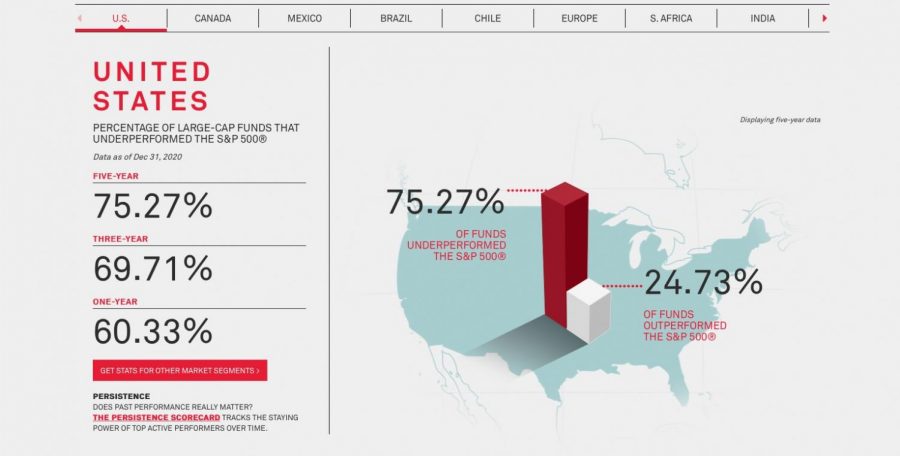 In the investing world, there are two main types of investing: active and passive. Active management involves the “active management” of one’s portfolio, which means constantly adjusting, trading, and shifting based on market movements, conditions, and sentiments. On the other hand, passive investing involves the buying of a large, diversified basket of stocks and holding them for long periods of time, usually for multiple decades.

BC High’s investment club falls into the active management side of investing, with students sometimes trading hundreds or even thousands of times in their simulated portfolios over the past 9 months! Averaged out, that is around 1 to 3 trades a day. While one may believe that active management is the best form of investing, they are sorely mistaken. As evidenced by this year’s MarketWatch game, the more someone trades, the worse they perform! How is this possible?

Well, there are major flaws to active management that the industry leaders do not like to mention. Firstly, active management requires stock picking. There are over 630,000 publicly traded companies throughout the world, but only around 100 are exceptional companies. Can one possibly think that they could find one of these companies out of the hundreds of thousands? Further, how does one know that these few companies will perform well into the future? No one has a crystal ball to see the future, and if people did, then the psychics and fortune tellers would be billionaires.

Secondly, the active investment space is far too crowded. As more people enter the market and trade, fueled by zero-fee trading platforms like Robinhood and Fidelity, stocks become more efficiently priced, which drastically lowers the amount of potential profit one can make off actively picking companies.

Thirdly, humans exhibit emotions and irrational behaviors such as selling at the bottom, buying the hottest new stocks, or taking on excessive risk. By choosing active management, one exposes their portfolio to potential reactionary trades, which may result in the lack of capturing upsides after a down market, or failing to capture the upside of a continuous bull market.

Fourth, actively managed portfolios are far less efficient than passive ones, as they exhibit trading costs such as commissions on trades and capital gains tax.

Lastly, and most important to BC High students, active portfolios are generally less diverse than their passive counterparts, which exposes one to the drastic movements of singular stocks, potentially ruining a portfolio due to one bad company. The students of the investment club know this fact all too well, as some invested all their money into stocks such as Tesla, Gamestop, and Moderna, while avoiding blue chips that offer stability and long term growth. All of these factors lead to the eventual underperformance of an active portfolio when compared to passive investing.

Here are some photos of the top 10 and the bottom 14 in the final rankings, which prove that for every winning trade, there is also a losing trade: 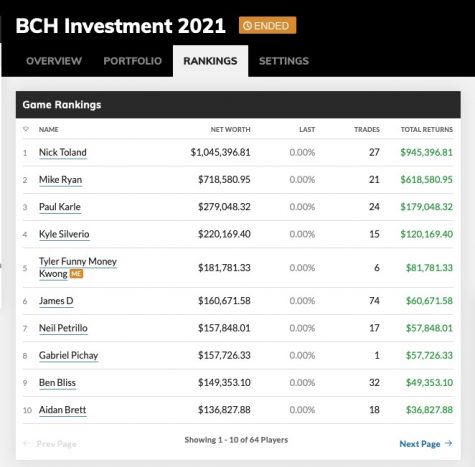 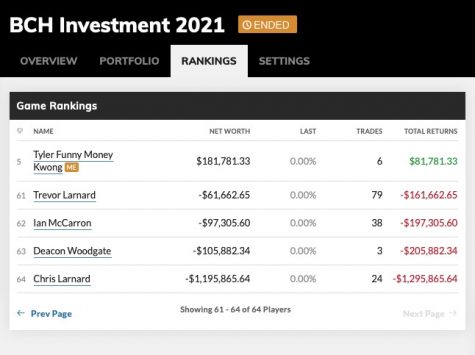 Ben Bliss and I calculated the average returns of a BC High student. Our figuring came out to about a sobering $2,000 return, far behind the S&P’s passive return of over $20,000 throughout the past 9 months. A 10-times differential! Some of the early leaders, who were up over $300,000, quickly descended into negative territory because of Gamestop and Tesla. The market humbles, but if one invests passively, they will almost always outperform the active managers. (Editor Comment by Ben Bliss ‘23: While it is worth noting that the game focuses on short-term returns due to its relatively terse nine-month-long span, passive management is still king. The top ten performers in the MarketWatch game made an average of 24 trades this year, a sizably different figure from the bottom ten’s average of 185 trades.) 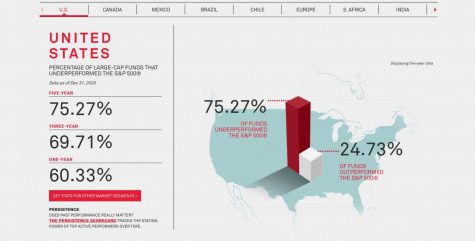